We've been making spaghetti
sauce over the last few days.
It's SO good!

I know this is normally a summer activity
for most gardeners, but cooking & canning
all day doesn't appeal to me while I'm melting
in the warmer weather. So I throw all my
tomatoes in the freezer and wait for 'wood stove'
cooking season.

With the latest cold front bringing in this chilly
weather, mid-November, it appears the season
has arrived! 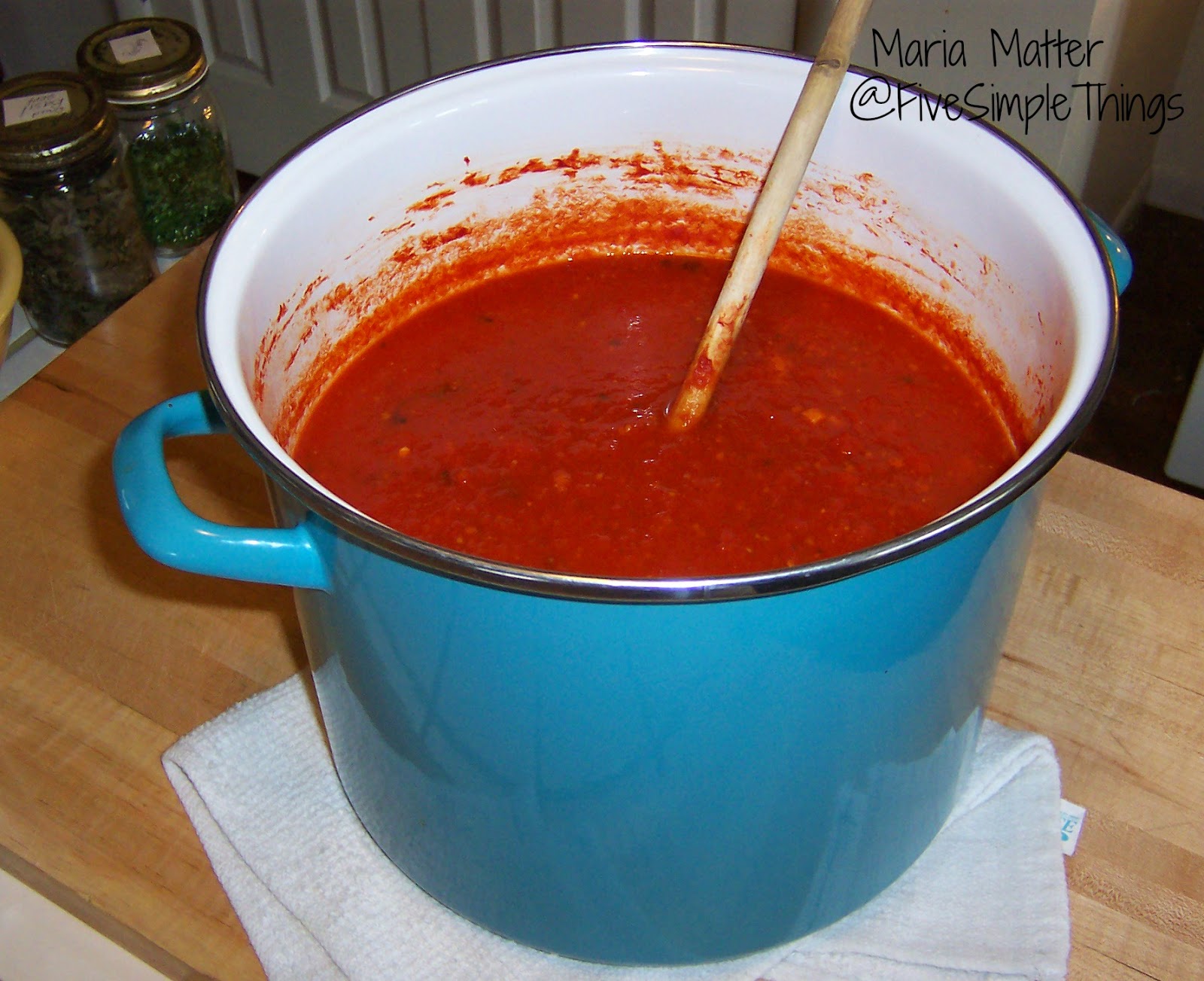 1. peel tomatoes
2. puree tomatoes in blender/food processor
for a thinner sauce
OR mash them if you like a chunky sauce.
3. In a large pot (at least 10 quart) cook garlic in oil.
4. when garlic is tender, add tomatoes and
remaining ingredients.
5. IMPORTANT- taste periodically.
6. Boil until sauce cooks down to desired thickness.

notes:
1. Paste tomatoes such as Roma or Amish have higher
levels of sugar and acids along with less moisture,
making them a better tomato to "cook down" than other
tomatoes. They are sometimes called sauce tomatoes.
If using only sauce tomatoes, start with less sugar
than listed above.
Personally, I use whatever tomatoes I have on hand,
(Roma, Amish, Beefsteak, even Large Red Cherry) and
just adjust the seasonings as they're cooking.

2. To easily peel tomatoes, dip in boiling water for
about 30 seconds or until skins begin to crack.

This is the personal recipe of Maria Matter @ Five Simple Things. 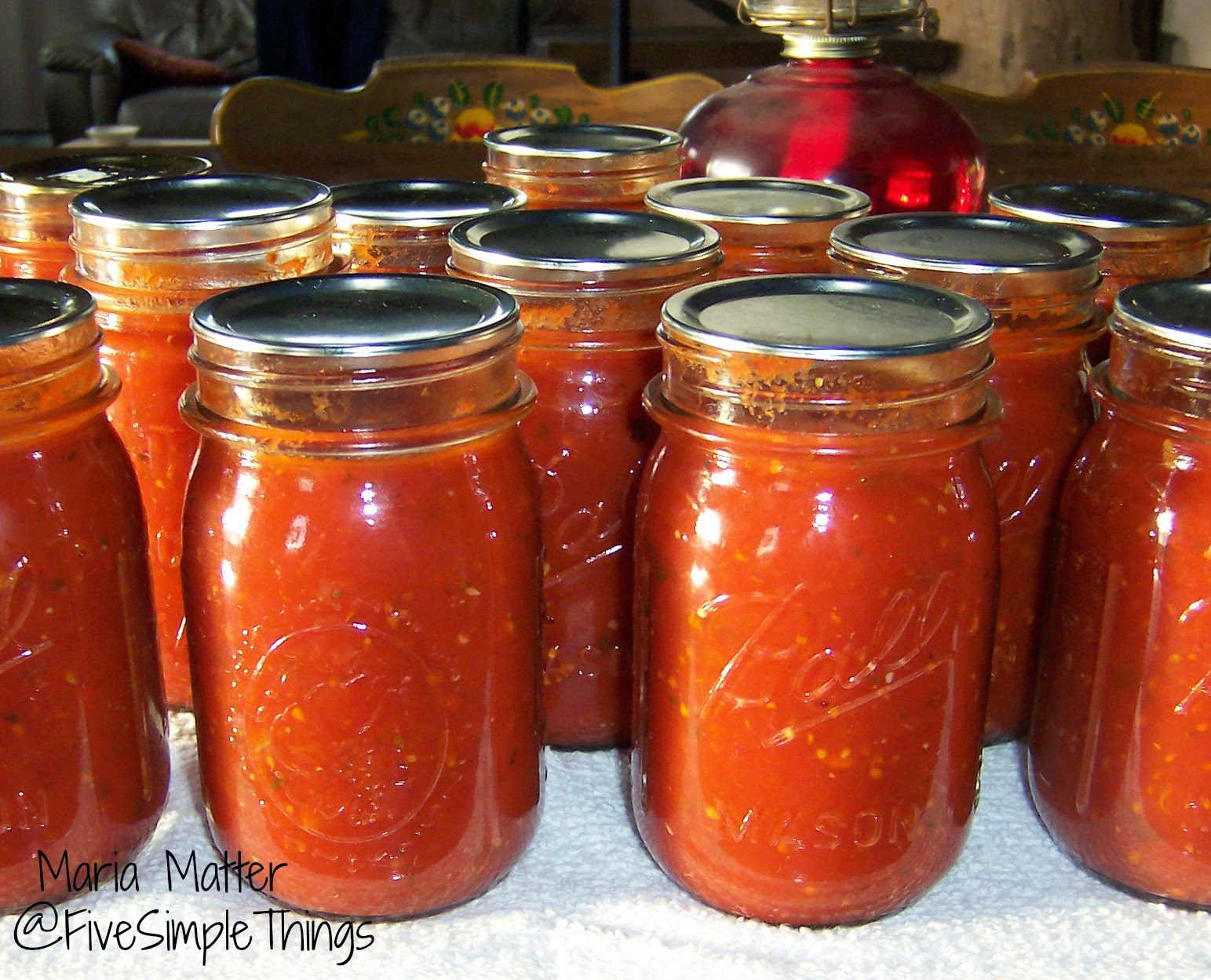 one more note:
As I mentioned above, I put my fresh tomatoes
in the freezer until I'm ready to process them.
I core them first and cut off any bad spots, then
fill up a freezer bag, removing as much air as
possible.

When you remove them from the freezer, place
them in a colander in the sink. As they start to
thaw, some of the water will drain reducing your
cooking time and the skins will crack on their own
eliminating the need to dip in boiling water. Let
them continue to drain for a while longer after
peeling.

If you've never made your own sauce, I encourage
you to give it a try and I would be happy to answer
any questions you may have. 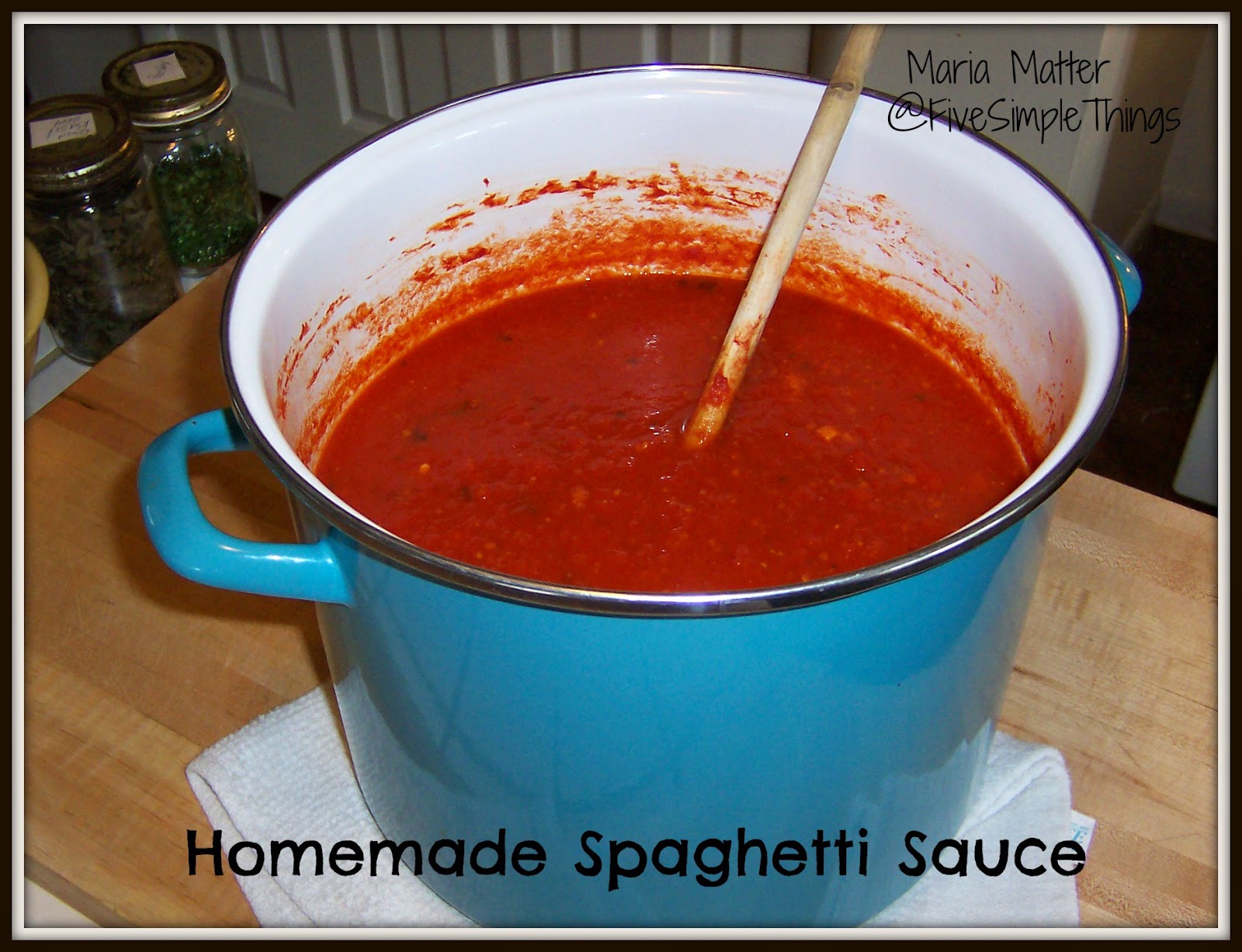 scroll down to see where I'll be sharing today's post.
Posted by Maria Matter at 6:00 AM

Email ThisBlogThis!Share to TwitterShare to FacebookShare to Pinterest
Labels: Preparedness, The Garden, The Kitchen

Thank you for commenting, I enjoy hearing from you!
Blessings, Maria